Posted at 07:44h in Announcements by Deneen Pottery 0 Comments
1 Like
Just before Thanksgiving Tammie, owner of The Coffee Cup located in Cameron, OK, was searching google for handmade mugs when she came across our website. "I looked at others but your product, professionalism, and website blew the others away."  Now we have her design ready for approval and we are eagerly looking forward to working on her first order of custom mugs!
Read More

Posted at 11:20h in News by Deneen Pottery 0 Comments
0 Likes
It's a snowy COLD day here in Minnesota - single digit highs and -30º below at night with the wind chill. Sorting through the importance of Facebook, and finding relavent material and ideas to share on a blog can be TOUGH. A few weeks back when I figured that I'd like to use our Facebook page to showcase 'Innkeepers Mug Displays' I was given a tip by  Linda Hayes from the Inn at Riverbend in Pearlsburg, Virginia about her friend Selena. "You should get [a picture] from Selena at Bed and Breakfast on Tiffany Hill, her retail wall with your mugs is beautiful." What a setting -And the inside is even better!

Posted at 13:54h in Just off the Kiln by Deneen Pottery 0 Comments
1 Like

Chuck and Debbie Young, the innkeepers of Country Willow B&B, placed an order with us near the end of October. On this order they branched out just a bit more and added more new colors. On their last order of custom handmade mugs they brought...

Posted at 14:54h in Announcements by Deneen Pottery 0 Comments
1 Like

Posted at 08:33h in Testimonials by Deneen Pottery 0 Comments
1 Like
When you work hard people take notice... Because we work REALLY hard on all of our orders, occasionally we hear back from our customers as they 'take notice' of their handmade stoneware mugs. Whether it is in the shape of a hand written card, letter, emails, or pictures, these notes are a joy to receive. We recently received one such email from a wonderful customer in Vermont that first contacted us in May, 'visionkeeper' of Peace of Mind Emporium Julie White RN: "We are Vermont's Premier Stress Reduction Store and Wellness Center created by Nurses. Our name, Peace of Mind Emporium, and lovely buildings and grounds, draw people in who are looking for an oasis from their stress - filled lives. They often remark that they want to take a piece of Peace of Mind home with them after visiting in our store..." 24 Sep Something Special for the Holidays

Posted at 12:05h in News by Deneen Pottery 0 Comments
0 Likes
In the throws of summer we begin to prepare for the holidays... It's crazy to have to think down the road 4 months, but when it comes to making handmade stoneware everything takes time! In August we send out an email to all of our customers offering a free set-up for anyone that hasn't ordered our ornaments, or 5 additional free ornaments to those that have ordered them in the past. We started doing this about 3 years ago and with that first special I received an email from Emily Hoche-Mong the Innkeeper at the Goose & Turrets:

"One Christmas season I gave all guests a handmade ornament from Deneen Pottery with my Goose & Turrets logo. One guest, a young lady from Australia, began to cry, and she flung her arms around my neck and said, "You are just so sweet, that's the only present I've gotten this Christmas." I will never forget that experience nor that Deneen Pottery was a part of it. Posted at 07:18h in News by Deneen Pottery 0 Comments
0 Likes
This entry isn't really about our custom handmade mugs, instead it is on our mascot Olive. In May of last year my wife Annie gave me a long awaited Christmas present in the form of a Mini-GoldenDoodle who we named Olive. She arrived weighing just over 3 pounds but took up a lot of space in our hearts! 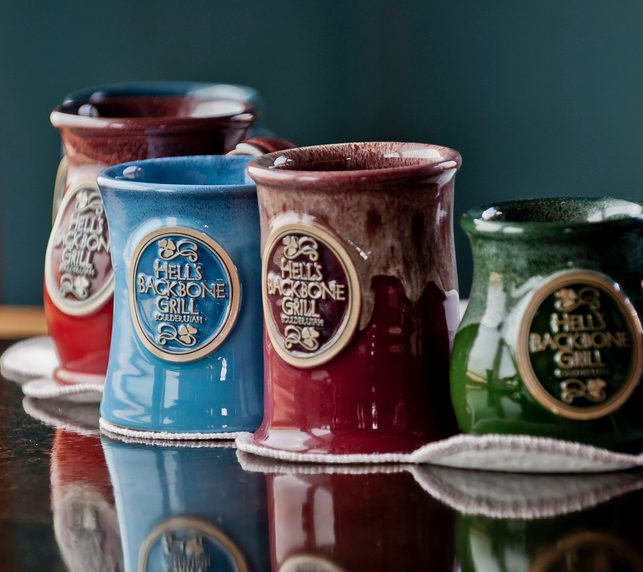 Posted at 06:24h in Pictures by Deneen Pottery 0 Comments
1 Like

At the end of January Annie and I flew out to California for the CABBI conference which was held in Monterey, CA. Since we are a fan of staying at Inns, and love staying with Innkeepers that serve coffee in handmade coffee mugs - The...

Posted at 09:33h in Pictures by Deneen Pottery 0 Comments
1 Like

The Wicher Garden - Queens Cup Recently I was working with Sarah Stotts, from BedandBreakfast.com, on an article about my family's Custom Pottery Mug business When she asked me for any new images of our handmade stoneware Jumping Rocks popped into my head. So...