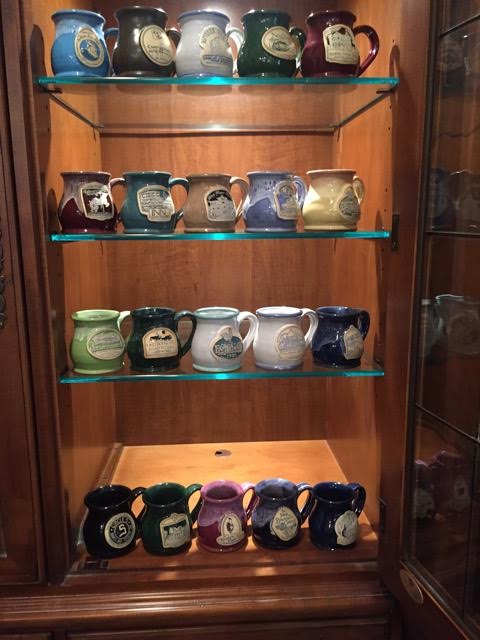 Mission Complete: 50 Mugs From 50 States Glaze: Industry: (We work with many different industries)

Everyone has their favorite collection.

It may be baseball cards, shoes, stamps, or books. Whatever it is, it’s something that you hold near and dear to your heart.

Because it’s not just things you’re collecting, but memories too.

A few years ago (actually 10 to be exact), we first wrote about self-professed mug collector Vince Smith and his quest for replacing a round belly mug that he had purchased from the Rose Hill Inn.

A few years later, Vince reached out to us again and let us in on new mission he had planned for himself: to collect a Deneen Pottery round belly mug from each of the 50 states!

Well, Vince has since updated us on his goal, and we are happy to say he has reached his destination! Vince now has 50 round belly mugs from each state — quite the collection!

“I probably called a total of 25 different inns, ranches, college bookstores, etc. to fill in the missing spots for those states in the collection,” Vince said via email.

“There was one disappointment that is sort of funny in hindsight. A woman from the Teddy Roosevelt Nature and History Association texted me a photo of what appeared to be a regular round belly. Her price ($24.00 plus shipping) seemed high, but feeling desperate, I made the purchase anyway. The disappointment came when the mug arrived, and it was a tall belly mug instead of a round belly. Back to the drawing board!!! I later found a light green round belly from the Lake Region State College in North Dakota which has the distinction of being #50.”

Naturally, once we heard the news that Vince had completed his collection, we had to ask him a few questions about his journey and Vince was kind enough to share his story.

What Has Been the Most Rewarding Part of This Mission?

As you may recall, the original two mugs that I purchased at the Rose Inn in Ithaca, NY were broken and I did not know where they had been made. It took some detective work and some phone calls over a period of a few months to discover that they were made by Deneen Pottery.

I never saw any round belly mugs on eBay for those last six states, so I decided to start calling the various vendors. Everyone was so nice, and it was interesting to visit about the ranches and B&Bs that they operated.

If You Had to Pick Just One Mug as a Favorite, Which Would it Be?

Since each one is unique due to the glaze engraved emblems, it is difficult to select a favorite. But, I think my favorite is the one from the Rose Inn that you sent to replace the originals.

You included a lid for that mug which makes it unique in the collection.

Another favorite is the one from Kilauea Lodge in Volcano Village, Hawaii, since we were actually in their restaurant to make the purchase.

You did not ask, but I have two or three least favorites. These are the ones from places like Egg Harbor Café and Another Broken Egg Café. 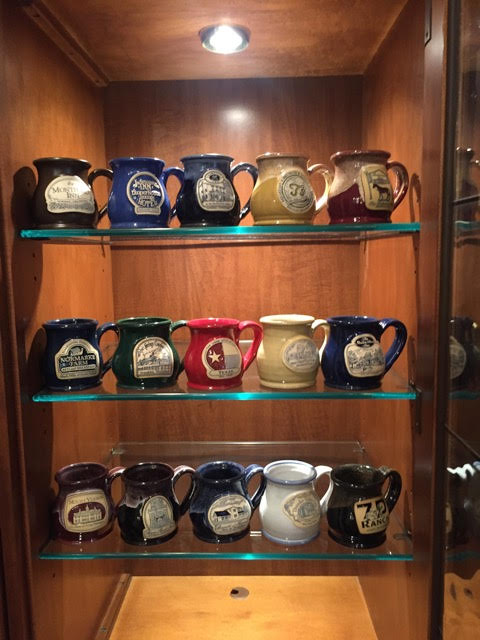 A Portion of Vince’s 50 States Mugs

Exercise patience and perseverance, since there will be disappointments along the way.

eBay worked pretty well, but I would also encourage others to use the map on the website and call around to fill in any missing spots in a collection.

Last Question, and Maybe One That is Obvious, But Why did You Decide on the Round Belly Mug?

The round belly was the style that I first purchased at the Rose Inn in Ithaca. I was somewhat fixated on finding that particular style during the search for replacements. That style may be the most popular which made the collection easier to complete.

Congratulations Vince on this amazing achievement! Hopefully, your journey will inspire others to set out towards a lofty goal and accomplish it!

Thanks for reading our blog!
Niles Deneen